I read more than 50 scientific studies about yoga. Here's what I learned. What studies do exist are often short term. There are no long-term studies on mortality or serious disease incidence. There are few long-term studies on the potential harms yoga can wreak on the body. "For most conditions," says Holger Cramer, director of yoga research at the University of Duisburg-Essen in Essen, Germany, "the main problem is we don't have enough evidence yet."

More from Show Me the Evidence

Studying yoga is also tricky. Researchers generally believe blinded studies are the highest quality of research, because participants involved don't know what intervention (such as a drug) they are receiving and their biases and perceptions don't color the outcomes. But you can't blind people to the fact that they're doing yoga.

Then there's the biggest question at the center of yoga research: How do you define yoga? "Yoga is many things to many people," said Karen Sherman, a researcher affiliated with the Group Health Research Institute. "What you put into a yoga intervention probably impacts what you get out."

Yoga usually involves some combination of the following: postures and poses (asanas), regulated breathing (pranayama), and meditation and relaxation (samyana). But many classes mix in other elements, from chanting to heating to music. There's also a lot of variation in teaching quality and style. Hatha and Iyengar yoga are mostly made up of stretches and restorative poses, while ashtanga and vinyasa tend to be more vigorous and athletic. Yin yoga probably won't make you sweat: You mostly hold postures for long periods of time for very deep stretches. In Bikram, which consists of 26 postures repeated twice in a room that's heated at 105 degrees, you can be sure you'll drench your yoga clothes in perspiration.

Lorenzo Cohen, chief of the integrative medicine section at MD Anderson Cancer Center, told me: "Many papers [on yoga] don't have enough of an in-depth description of what they mean by 'yoga.' What was the level of training of yoga therapists? How did they choose different postures or breathing exercises?"

What's more, there are so many components in a yoga class, it's tough to know what might be having an affect on health: If people report feeling better after a class, was that due to the experience of being part of a larger group? Was it the teacher's style? Was it the breathing exercises? The heat? These factors are difficult to isolate, and some of the ways yoga helps people might be hard for scientists to measure.

Still, the yoga researchers I spoke to said the quality and quantity of studies has been improving, so we may get better answers soon. "There are more researchers conducting yoga therapy studies, and when the smaller trials suggest benefit, that leads to larger, better-designed trials," said Cohen. There is also a move to study the biological outcomes of yoga — how classes affect things like hormone levels — which will lead us to a more objective picture of what yoga can do for the body.

1) Is yoga likely to hurt you?

This question first came up in 2012, when the New York Times published a splashy article suggesting that yoga can wreck your body. The piece, adapted from the book The Science of Yoga: The Risks and Rewards, suggested yoga caused widespread harm to its practitioners — from ruptured disks and stroke to brain injury.

But that piece was largely based on cherry-picked anecdotes, exaggerating these horrible cases to suggest they were representative of the broader yoga experience when they simply aren't.

Cramer has studied published reports of injuries and other harms from yoga for several review and told me this: "We found yoga is as safe as any other activity. It's not more dangerous than any other form of exercise." He added: "Yoga is not 100 percent safe, but nothing is 100 percent safe."

In a 2013 review of case studies, Cramer identified 76 unique incidents of adverse events from yoga. "Most adverse events affected the musculoskeletal, nervous, or visual system," he concluded. "More than half of the cases for which clinical outcomes were reported reached full recovery, 1 case did not recover at all, and 1 case died."

MOST OFTEN, PEOPLE GOT INTO TROUBLE WITH THE HEADSTAND POSE, FOLLOWED BY SHOULDER STAND AND POSTURES THAT REQUIRED PUTTING ONE OR BOTH FEET BEHIND THE HEAD

Most often, people got into trouble with the headstand pose, followed by shoulder stand, postures that required putting one or both feet behind the head, the lotus position, and forceful breathing. Pranayama-,  hatha-, and Bikram-style yoga practices had the most adverse events associated with them.

Based on these cases, Cramer and his co-author had this practical advice for how to stay safe in yoga: Beginners should avoid advanced postures (such as headstands), and people with chronic health conditions (such as glaucoma) should consult their doctors before diving in. "Yoga," they added, "should not be practiced while under the influence of psychoactive drugs."

As for long-term yoga harms, Cramer pointed to two studies on joint and cervical disc degeneration in people who have been doing yoga for a while. But the studies had contradictory results, "so long-term health consequences cannot be clearly derived from the available evidence," Cramer said.

I asked MD Anderson's Cohen for his take. "There can, of course, be negative consequences if done incorrectly, like any body manipulation," he said, "but if you have the right teacher this will not happen." Even if a lot of yoga over a lifetime leads to injury, it's not clear those harms outweigh the benefits, or that people would have been better off running or weightlifting all the time.

2) How does yoga compare with other forms of exercise?

The short answer is: It depends on the type of yoga. Yoga classes that involve nothing more than lying around on piles of blankets and breathing aren't likely to build your muscles. But more strenuous types of yoga like ashtanga can be surprisingly similar to other forms of vigorous exercise.

"Some studies show, depending on yoga style, that it doesn't improve fitness as much as other forms of exercise," Cramer says. "But for rigorous and intense styles [of yoga] — that can be a form of exercise. It strongly depends on what you do when you do yoga."

For example, a few high-quality studies have shown that certain types of yoga can indeed make people stronger. One small, randomized trial in the Journal of Strength and Conditioning Research — which compared eight weeks of Bikram yoga with no intervention in 32 young, healthy, adults — found that the yoga classes improved people's deadlift strength.

The Bikram classes didn't, however, improve the participants' aerobic capacity. Another before-and-after study, published in the Journal of Clinical Nursing, found that hatha yogacould improve aerobic fitness in older people. Still, it's not clear that yoga is ideal here compared with, say, running or swimming.

Considering the mixed findings, a bit of common sense is helpful: If you go to a class mainly focuses on relaxation and doesn't elevate your heart rate, you're probably not getting a good cardio workout or building muscles.

If you go to a more athletic yoga class that tires  out your muscles and makes you pant, you can probably count on it helping to make you stronger. If you are panting in a yoga class, you're probably improving aerobic capacity to some extent. That said, if your main goal is building aerobic capacity, you might want to try running or swimming instead of or in addition to yoga.

1975: Lancet — "Randomised controlled trial of yoga and bio feedback in management of hypertension." This is the first-ever randomized trial on yoga, and it found that yoga was more effective than relaxation in reducing high blood pressure.

1985: British Medical Journal — "Yoga for bronchial asthma: a controlled study." This is the first randomized trial on yoga for asthma, and it was one of the first to show the effects of yoga on the inner organs.

2013: Journal of the American College of Cardiology — "Effect of yoga on arrhythmia burden, anxiety, depression, and quality of life in paroxysmal atrial fibrillation." One of the first trials to show that yoga may have an impact on life-threatening diseases such as atrial fibrillation.

2013: Journal of Strength and Conditioning Research — "Bikram Yoga Training and Physical Fitness in Healthy Young Adults." This trial showed Bikram yoga can improve strength and flexibility but not aerobic capacity.

2014: Journal of Clinical Oncology — "Randomized, controlled trial of yoga in women with breast cancer undergoing radiotherapy." This high-quality trial demonstrated yoga can have benefits for women being treated for breast cancer.

2015: Brain, Behavior, and Immunity— "Mind-body therapies and control of inflammatory biology." A review of the evidence on yoga and other mind-body activities, and their relationship to reducing inflammation.

For all the talk of yoga lifting moods and calming people, the studies on this question are still surprisingly inconclusive.

"There are indications that it might be helpful," Pilkington says. "But lots of the studies are quite small, and we definitely need more and bigger studies." In other words, yoga might help with mood disorders, but we don't yet know for sure because the studies to date have generally been so badly designed. "We can't say there’s conclusive evidence that yoga works for depression and anxiety," she explained. "We’re still really exploring yoga as an idea for testing and the best ways of testing it."

One complication here: When it comes to conditions like anxiety and depression, it can be difficult to untangle whether it's the yoga that's helping or simply the act of going out, joining a group on a regular basis, and so on. Even if yoga turns out to be unequivocally beneficial for depression, other research has shown that exercise in general can alleviate depression. So, again, it's not clear that yoga is the only way to get this benefit.

As for stress reduction, there are a few randomized trials — the highest-quality evidence — that have suggested yoga is about as effective as simple relaxation programs, more helpful than no intervention, but not as effective as stretching. Pretty mixed results.

4) Does yoga have long-term health benefits?

Possibly. To be clear, there's currently no directevidence on yoga's long-term benefits. Researchers simply haven't tracked yogis over a span of 20 years or more and followed up to see whether they get diseases at a lower rate than non-yogis.

But that's not the whole story. There are also some randomized controlled trials suggesting that yoga may improve quality of life for diabetes patients, reduce cardiovascular disease risk factors, and even help people manage high blood pressure

How can this be? One possibility is that yoga can help reduce inflammation in the body — which turns out to be surprisingly beneficial.

Yoga — like other mind-body exercises such as tai chi and meditation — seems to be particularly helpful at reducing harmful inflammation. A 2014 meta-analysis on the effects of mind-body therapies on the immune system found that yoga reduces inflammation-based blood markers. So did this 2014 randomized control trial looking at women with breast cancer and breast cancer survivors.

Michael Irwin at UCLA's medical school, one of the authors of a 2015 descriptive review on inflammation and mind-body exercises, said, "When you look at the aerobic exercise necessary to decrease inflammation, people have to maintain very vigorous levels." But not with yoga, he continued. "Even practices with minimum levels of physical activity [like Iyengar stretches] can have large effect sizes." Researchers don't yet know why, though they think the meditative components of yoga, tai chi, and meditation may have something to do with it. 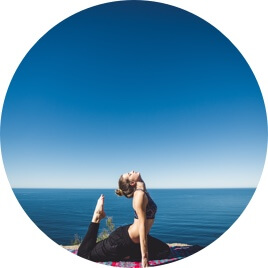 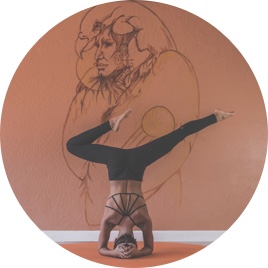 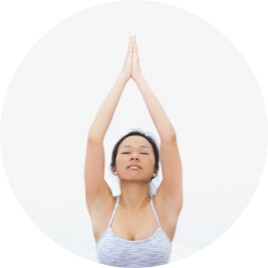 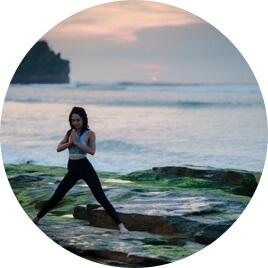 This is a paragraph. You can use this to communicate content within your page.